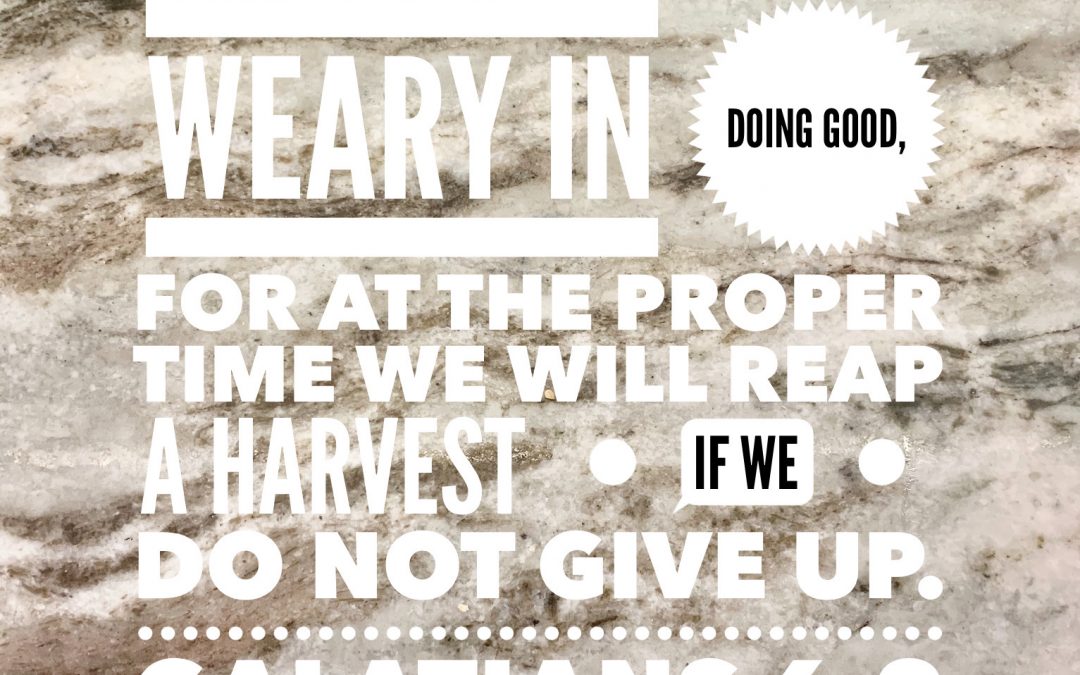 ﻿A reminder to never give up…no matter how many times you fail!

This one can admittedly be tricky because at a certain point I think it’s natural (especially if you’re actively working on discerning God’s will) to wonder if the thing you’re chasing is maybe just not God’s will.

I have this core belief at my cellular level, and like most things, it’s probably a combination of DNA and upbringing. I realize now it’s both one of my best assets and one of my worst character flaws. So I keep it in check by being vulnerable, open, honest, and seeking feedback from wise and trusted friends.

The core belief is that failure is not an option — if you fail you try again until you get it right, and when you get it right, you work harder still to get it better the next time. And the time after that. Until it’s “good enough”.

I always “knew” perfection was an illusion, but for me accomplishments rarely felt “good enough”. So, even though I wasn’t consciously seeking perfection, I almost always felt “less than” because of my definition of “good enough”. Perfectionism and dogged perseverance have historically been major hindrances to my joy.

HOWEVER, They were also why I was so “successful” in sales. There was never an account I couldn’t close…I just hadn’t closed it yet. And I worked tirelessly until I closed it. 16 hour days, 5 day-a-week travel. For years. I always eventually closed it. And so the core belief was further cemented: Work harder, you will win. Most people would have looked at my bank account and said I had won. That the hard work paid off.

But I never felt like I had won. That career was not life-giving work for me. This is not a judgement on a sales career — we NEED sales people, but it left me empty. It was not my calling. My soul cried out for something more. And all the money vanished eventually anyway so I had not won at anything. Certainly not at living life.

Starting a business doing something that filled me up took a giant act of faith and courage, and it has been a tremendously humbling experience. My core beliefs were called into question on most days, and I’ve nearly given up dozens of times. And even still, 31/2 years later, I most certainly have not “arrived”…I mean, the average 5 year old would probably take a look at my bottom line and emphatically point out that we are going in reverse. And yet, I know I have already won the game! I certainly have hard days where I have to dig deep, but ultimately I know I have won because I did the uncomfortable thing. Because I followed my heart. Because I didn’t settle. Because I have faith that more will be revealed. And because my soul is filled with purpose, laughter, gratitude, and service.

I have found that one essential element in making perseverance an asset rather than a defect is to have loving detachment from outcome without losing strong attachment to a pure and unselfish “why”. This is extremely difficult because:

Perseverance and stubbornness have a very fine line between them.

As humans we have egos whose survival depends upon victory.

Because patterned outcomes in life have seemingly had a very clear cause/effect relationship, we have developed an illusion that we can control things.

We desire something, and therefore we think it must be what’s best for us.

Experience has often taught us that hard work pays off better than being lazy, and generosity pays off more than selfishness.

In my experience, hard work, good deeds, and pure motives certainly have (seemingly) brought more “success” than their alternatives, but not

% or even 90% of the time, and that ate at me. Over the years I could feel my excitement for life slowly dwindling as what WAS happening and what I felt “SHOULD” be happening based upon my set of core values came into conflict again and again.

But when you have faith that more will be revealed in Gods perfect timing (roadblocks, detours and speed bumps have a divine purpose), even if what’s revealed is a change in plan, when you have a strong sense of purpose, when you have pure motives, and when you have disconnected from your ego and your expectations, it become just a little bit easier to do the next right thing. One small step toward your goal, with no expectation of result. It’s not easy but it gets easier, and I have found that it’s the difference between joy and suffering, between acceptance and resignation…no matter what your circumstances are in the present moment.